A Pattern Dystrophy of The Retinal Pigment Epithelium

The late-onset of macular conditions in this man lead to a misdiagnosis of age-related macular degeneration.

A 73 year-old black man presented to our clinic for a second opinion of a recent diagnosis of age-related macular degeneration (AMD) O.U. He reported no ocular or visual complaints. His past ocular history revealed no other abnormalities, and his past medical and family histories were both unremarkable.

The patient's best-corrected visual acuity was 20/25 O.U. Both pupils were equal, round and reactive to light with no afferent pupillary defect. Amsler grid revealed no central scotomas or metamorphopsias O.U. Slit lamp evaluation was only remarkable for mild nuclear sclerosis O.U. Dilated fundus exam showed symmetrical sub-retinal oval lesions in the macula with surrounding drusen-like deposits (see figures 1a and 1b). 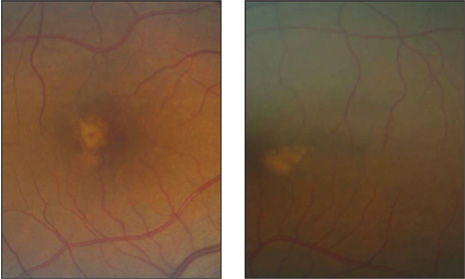 Figure 1a & 1b: Symmetrical sub-retinal oval lesions in the macula with surrounding drusen-like deposits.

To further evaluate these lesions, we performed an optical coherence tomography (OCT) scan (see "The OCT and Pattern Dystrophies," page 72). The OCT revealed bilateral hyper-reflective, domeshaped elevations within the retinal-pigment epithelium (RPE), just below the fovea (see figure 2). We didn't observe any associated subretinal or intraretinal fluid, which may accompany such findings. The retinal map revealed a normal central retinal thickness of 191μm O.U. Retinal thickness was not affected since the lesion was isolated to the RPE and there was no associated retinal edema.

Aside from AFVD, this group of disorders includes butterfly-shaped pigmented dystrophy, reticular dystrophy and fundus pulverulentus.2 Patients with pattern dystrophies may show distinct configurations between the eyes. Researchers have described that pattern dystrophies can even transform from one pattern type to another.

AFVD is similar to Best's disease, characterized by a small round subfoveal "egg-yolk" lesion. Unlike AFVD, Best's disease patients typically manifest signs of the condition by age 10.2 Practitioners commonly observe AFVD in early adulthood with signs and symptoms manifesting in the third and fifth decade of life.2 The clinical presentation of Best's disease generally includes a larger lesion, progressive disruption of the lesion and abnormal electro-oculogram (EOG), all of which differentiates it from AFVD.

Butterfly-shaped dystrophy has a tri-radiation pattern of yellow or darkly pigmented deposits. Reticular dystrophy has granular "fishnet" deposits, radiating out and extending into the mid-periphery. Pulverulentus dystrophy, the rarest of these conditions, has an early, spotty, mottled pigmentation in the posterior pole that eventually develops into a coarse "punctiform," mottled RPE.

Patients with any pattern dystrophy of the RPE may present with drusen-like deposits and pigmentary changes. Choroidal neovascularization (CNV), although rare, can be associated with these dystrophies.3

Because of the late onset of these macular conditions, practitioners often misdiagnose pattern dystrophies as AMD. Patient demographics, aspects of the clinical presentation and auxiliary testing, such as OCT, may help determine the correct diagnosis.

The inherited mode of these conditions is autosomal dominant, with associated mutations localized to the peripherin/retinal degeneration slow (RDS) gene.4-7 Due to the variability in expression and gene penetration, manifestations of these diseases are inconsistent, with variable presentations within family or even the same individual. While practitioners most often observe the actual macular changes in the second to fifth decade of the patient's life, the visual disturbances aren't significant.4 Typical symptoms include decreased acuity and metamorphopsia.4,5

We educated our patient on his condition and recommended he return to us on a bi-annual basis so we could monitor his AFVD for progression or complications. Complications associated with progression of these subretinal lesions may include associated retinal edema and, although rare, CNV.

We also suggested that his family members be evaluated with a comprehensive eye exam, including dilation, due to the inherited nature of the disease. Finally, we provided him with a home Amsler grid to monitor any visual changes.

The prognosis for pattern dystrophies is good, with patients maintaining reading-level vision in at least one eye throughout the remainder of their life.3

This patient has not yet returned to the clinic. OM