A look at technology most often employed posteriorly. 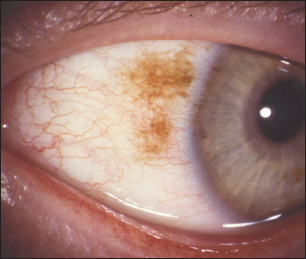 Specifically, because slit lamp skills can take years to acquire, many of you may feel uneasy about delegating anterior segment photography to staff. Hence, the benefit of entering an exam room to find the photography already complete and displayed on the computer monitor — a timesaving benefit often cited among posterior camera adherents — usually goes unrealized with anterior segment technology.

“Operating these devices is not like taking a fundus photo,” explains Ann M. Johannsen, O.D., who practices privately in Claremont, Calif. and employs three slit lamp adapter camera systems. “With anterior segment cameras, the focus and lighting are tricky, so we [the optometrists] tend to operate them.”

Yet, despite this frequently mentioned drawback, Dr. Johannsen, among others, say these cameras are well worth the investment, especially in practices that treat large contact lens and/or medical-surgical populations.

Here's an overview of anterior segment cameras and the reasons those interviewed feel the cameras are worth acquiring.

Devices sans OCT or CM capture what you can see during a slit lamp exam via color digital images that are storable on computer hard drives and EHRs for future reference. The anterior segment systems provide in-depth views of the anterior structures.

“When we experienced the additional information we were getting with posterior OCT images, such as observation of the photoreceptor layer, changes in ganglion cell density, vitreomacular traction syndrome, as well as many forms of retinal edema, we decided to pursue the anterior segment option as well,” says Robert L. Davis, O.D., F.A.A.O., a solo practitioner in Oak Lawn, Ill. “For a nominal amount of money, in comparison to the additional information the instrument generates, we are providing a valuable service to our patients.”

Research has demonstrated you can use OCT to aid in the diagnosis of several anterior segment ailments and in certain procedures.1

► Corneal transplants. OCT has proven critical in pre-operative and post-operative evaluations. For example, it provides a clear view of the seam where the donor's and patient's tissue meet.
► Glaucoma. OCT provides a non-contact, more objective means of angle assessment.
► Keratoconus. The “global” pachymetry (i.e., taken at multiple corneal locations instead of one) offered by anterior OCT can help catch this disease, which is largely symptom free, in its early stages. Such examinations have become essential in pre-screening potential refractive surgery patients.
► Refractive surgery. In terms of current standards of care, OCT is most widely valued as applied to refractive surgery patients and is appreciated for the post-operative evaluation of the residual stromal bed and flap.

“Every patient being referred out of our office for any kind of refractive procedure receives an anterior segment OCT scan,” says Dr. Davis. Referring optometrists can be held legally liable for poor outcomes, he says. So he cautions you, the O.D., not to rely on the surgeon alone for due diligence in these matters: “Referrals should not be made if there are anomalies on the posterior surface of the cornea,” he says.

► Tumors. OCT can image anterior segment tumors without water immersion or a probe making direct contact with the eye.

The medical literature supports the use of CM for a variety of diagnostic applications.2 Christine W. Sindt, O.D., F.A.A.O., director of the Contact Lens Service and associate professor of clinical ophthalmology at the University of Iowa's ophthalmology and Visual Sciences, in Iowa City, Iowa, and a team that includes Brice Critser, a certified retinal photographer, has contributed to this field. For example, they recently published findings that indicate fluorescein staining and CM can be used compatibly.3

“Confocal microscopy allows you to image in microscopic detail the corneal tissues themselves,” says Mr. Critser. “So you can actually go in (and) get a count of individual corneal epithelial cells in certain defined areas.”

CM is used clinically to look for pathogens or disturbances in the normal functioning of the cornea. There are many research applications for CM, including epithelial cell density. Cell types can be differentiated.2 Of particular interest are dendritic or Langerhans cells, thought to be important regulators of immune reactions. In this way, you can use CM anterior imaging to reliably determine whether a patient's immune system is playing a role in contact lens wear problems and the migration of immune cells into the cornea. Also, the CM images enable differentiation among bacterial, fungal or protozoan agents. For example, identification of Acanthamoeba is a well-known application of CM. Another application of CM is diagnosing damage to cells caused by topical ocular drug preservatives. 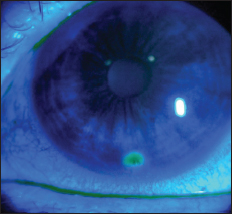 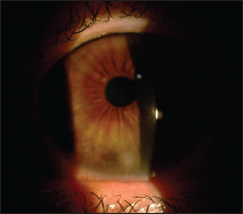 The same corneal ulcer without dye. Both views are helpful to see detail, depth and healing.

“It's not at the point yet where we can actually have progression studies on some of these infections, but that's one place I'd like to see this technology go,” he says. “Then we could re-examine that same exact spot to see if therapy has inhibited growth or caused it to go into remission.”

“What these technologies have done,” concludes Dr. Davis, “is they have levelled the playing field for the average practitioner. Now, we can diagnose things that in the past only specialists could diagnose.”

The reasons for anterior segment cameras

There are four main reasons you should consider employing an anterior segment camera, say those interviewed.

1. Seeing is believing. Patients often underestimate the value of anterior segment health. Though they tend to have a visceral regard for the vulnerable and crucial workings of the posterior segment, when it comes to the ocular surface, a cavalier attitude prevails. Contact lens schedules are flouted, dry eye symptoms ignored, any odd assortment of over-the-counter products blithely applied, etc. Changing this mind-set is a benefit of employing an anterior segment camera, say those interviewed.

“When patients can see what we are talking about, they understand it better,” Dr. Johannsen says. “Now, when they come back in a week, I've found they're much more likely to have done what I've asked them to do.”

Jeff D. Miller, O.D., who practices privately in Stillwater, Okla. and uses a slit-lamp-mounted camera with a beam splitter in each of the practice's eight lanes, agrees.

“Let's say you have a patient with corneal infiltrates, and they've seen a photo of their condition. When they come back for follow-up, you'd be surprised how many ask to see the photo again, to see if they've made progress,” he explains. Even family members cannot resist the powerful visual images: “Everyone in the room stands to attention when photos are taken,” Dr.Miller says. “They all move right over to the computer screen.”

2. The “Wow” factor. Dr. Johannsen says another benefit of using an anterior segment camera is that it impresses patients to the point of instilling patient loyalty.

“When you can actually show the patient their pterygium, pinguecula and ocular dryness, among other front-of-the-eye issues, often times you have a patient for life because he/she places a great deal of value on the fact that you have the technology to show him/her exactly what you are seeing and follow any progression,” she says.

Dr. Johannsen adds that this “wow” factor has also led to patient referrals.

“Front-of-the-eye issues can be familial, so patients will tell me about someone in their family who also has ocular dryness and itching, for instance, and that family member will make an appointment with me,” she explains. “Or, a patient will tell their friends about the camera, and that friend will present to the practice, so he/she can see what their possible issue is as well.”

“Something like a freckle on the conjunctiva, a little nevus, these things can change so slowly that they go unnoticed,” explains Dr. Sindt. Such cases can become serious. “If you catch these things early, you might save lives,” she says. “If you don't, the patient could die.”

“I've been using a slit lamp for 30 years, but even for me, when moving through the different corneal layers, sometimes it's difficult to focus on exactly what you're looking for,” she says. “When using video, you don't have to be as precise because somewhere in that five or six seconds of footage you know you've got a good view. So I can just find that image and freeze it.”

4. A wide range of billable diagnosis. Dr. Miller says another benefit of having an anterior segment camera is that he's found anything photographed that isn't “normal state” is reimbursable by both medical billing and Medicare.

“I have never had anyone deny coverage for a photo of pathology,” he says. “I've taken photos of blepharochalasis, conjunctival injection, conjunctivitis, infiltrative keratitis; the billing is really unlimited.”

“ … If it's a medical problem, it's perfectly billable as an anterior segment photo,” she says.

Both doctors stress, however, that they always use the device based on medical necessity.

Reimbursement (under CPT code 92285) runs in the $30 to $60 range, with Medicare falling on the lower end. Dr. Johannsen notes that in California, VSP's Primary EyeCare Plan pays roughly $88 for anterior segment photos.

But do the cameras provide enough billing to justify their cost?

Dr. Davis, who uses the anterior segment package on his freestanding OCT scanner on a regular basis, agrees.

“The reimbursement level for posterior OCT has dropped quite a bit through the past five years and due to the expense of the device, many practitioners are concerned about achieving their ROI,” he explains. “But, adding the anterior segment evaluation component of the OCT and billing for multiple procedures easily makes the device worth its cost. You're providing an additional level of care that patients really appreciate.”

Dr. Johannsen adds she occasionally snaps an image of a healthy patient free-of-charge, as she's found doing so offers reimbursement in the form of patient loyalty — something else that pays huge dividends.

Back to the beginning

Although anterior segment cameras tend to be under the jurisdiction of the practitioner as opposed to a staff member, Dr. Miller says these cameras can still fit smoothly into office workflow.

“If I didn't have these cameras, I'd have to step away from the slit lamp and attempt to draw a picture for patient education and documentation purposes, and that takes far longer than entering a patient's name in a computer, stepping on a foot peddle and archiving the photo in a computer,” he says. “A doctor's rendering of pathology requires a lot more explanation than acquiring an actual photo of it.” OM