Although contact lens industry data from 2016 reveal several notable findings, the two stand outs are: the continued growth of daily disposables and myopia control via lenses, according to the annual contact lens report (a practitioner survey) published in the January 2017 issue of Contact Lens Spectrum (CLS). (Both CLS and OM are published by PentaVision LLC.)

“First, the continued growth of the daily disposable segment is remarkable and not showing any signs of slowing, comprising about 1/3 of soft lens fits today,” explains CLS Editor, Jason J. Nichols, O.D., M.P.H., Ph.D. “Second, the continued adoption of myopia control with optical interventions is compelling when you look at the numbers from 2015 compared to 2016.”

Daily disposable prescriptions led in soft lens replacement with a range of 31% to 39%, according to market insights from CLS, ABB Optical, GfK Retail and Technology and Glimpse Live. The modality also was linked with the most growth with a range from 5% to 20%. Monthly soft lenses showed a range of 28% to 44%.

Of note: A total of 83% of practitioners said they think the contact lens design or modality with the greatest growth potential/anticipated use through 2017 is silicone hydrogel (SiHy) daily disposables, with SiHy multifocal lenses coming in second at 67% and scleral lenses third at 41%. Further, 57% of practitioners said they think the soft lens they’ll fit more of this year is a daily disposable.

Thirty-seven percent of practitioners indicated they actively practice myopia control using contact lenses compared with 24% in 2015. The lens of choice: soft multifocal designs (51%), with orthokeratology coming in second (44%) and GP multifocals taking third place with 5%. (In 2015, orthokeratology lenses for myopia control were the lens of choice.)

Given the slew of myopia control workshops, such as “Controlling the Progression of Myopia: Contact Lenses and Future Medical Devices” (co-sponsored by an array of eye care associations, such as the American Academy of Ophthalmology, American Academy of Optometry, American Association for Pediatric Ophthalmology and Strabismus and the FDA), 2017 may usher in several FDA-approved myopia control methods, opines Dr. Nichols, in the report.

View the complete article at clspectrum.com/issues/2017/january/contact-lenses-2016 ■

Vision Expo, which took place March 30 to April 2 at New York City’s Javits Center, was not only chock full of exhibitors and show floor traffic, but also eye care professionals eager to expand their knowledge base through the event’s various educational offerings.

“This year, the most talked-about sessions at Vision Expo East took place not only in the classroom but across the show floor,” explains Ben Gaddie, O.D., F.A.A.O., a co-chairman of the Expo’s conference advisory board. “From the collaboration with Google to the practice owners and managers track, attendees report that they came to the show to learn what’s happening, and the innovations that are coming, so they can make informed business decisions and develop their plans for the future.”

“I think this has to do with the popularity of practice management issues discussed in ‘ODs on Facebook,’ as well as the esteemed panel we put together . . . ” he explains.

He adds that “The Greatest Social Media Course Ever” track garnered the most attendee questions, indicating people are “curious about using social media as a marketing tool, and they realize its importance . . .” ■

In fact, the amount of time fathers, in general, spend with their children has nearly tripled since 1965, according to “Modern Parenthood,” a 2013 Pew Research Center report. (That said, mothers spend roughly twice as much time with their children as fathers do (13.5 hours per week for mothers in 2011, compared with 7.3 hours for fathers, the report shows).)

Optometrists are noticing the increased role millennial fathers are taking in comparison to dads of other generations.

“In my practice, fathers are accompanying their children to an increased number of appointments, with or without mom, and are invested in the information being given regarding their children,” explains Patricia M. Fulmer, O.D., F.A.A.O., of Huntsville, Ala., “Additionally, by observing their interaction with their children, you can often tell that they have a deep, communicative bond with them as both parent and friend.”

How can you utilize YouTube to attract these doting dads? Mike Rothschild, O.D., of Carrollton, Ga., who has created videos in the past, suggests providing a tour of your practice; education on how to fill out paperwork, what to expect from insurance; how to insert, remove and care for contact lenses; how to clean frames and general information on what happens at an eye exam and when/what to expect when bringing your child in for an eye exam. ■

Laurie Capogna, O.D., OM’s “Nutrition” columnist and co-author of “Eyefoods: A Food Plan for Healthy Eyes” and “Eyefoods for Kids: A Tasty Guide to Nutrition and Eye Health,” has just released “Cooking with Eyefoods: Recipes to Protect Your Eyes From Blue Light.”

“Patients and colleagues have been asking for additional recipes and my co-author, Barbara Pelletier, O.D., and I decided to start writing smaller books individually on more niche-specific topics that include recipes and newer information and studies,” she explains. “The first of the bunch is on blue light, which is something that not only affects all patients, but concerns them as well, given the widespread use of electronics.” 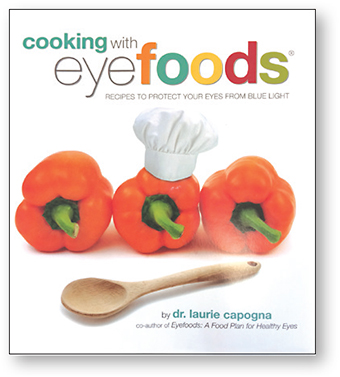 To order the book, email sales@eyefoods.com. ■